China was one of the larger influence of yellow clothing in the 18th century. So-called "Nankeen"-yellow - originating in Nanjing - became fashionable; it was a paler version of yellow. During the 18th century, the trading between China and Europe became more common which inevitably led to an increased influence of Chinese cultural views in Europe. In fashion, the colour yellow became associated with wealth and prosperity - thus perfect for the aristocracy. As for the Chinese, they had long considered yellow to be an indicator of glory, wisdom and wealth.

Not only China had an influence on the emergence of yellow into the halls of Versailles. France's (and other European powers') colonial connections brought new plants to Europe which were capable of producing brilliant yellow hues. Fustic was extracted from South American plants while quercitron hailed from North America.

Especially during the middle of the 18th century, strong colours were very much in vogue. An observer at the court of England in 1744, noted a lady wearing a gown and petticoat both in yellow which was "very much the mode in England at present".
However, yellow had been fashionable earlier, too. From the letters of Madame, we know that the Duchesse de Foix wore a yellow gown with matching yellow ribbons in her hair for a ball in 1720. Even earlier, the English Princess Louisa Maria Stuart (in France with her exiled family) wore a set of yellow velvet for the New Year's celebrations of 1708.

Yellow was one of those colours that survived throughout the 18th century due to its innumerable shades. Everything from the palest yellow, to primrose to a deep saffron yellow could be found in the milliners' shops.
New shades of yellow meant new - and often ridiculous - names: "dying ape", "poisoned ape" (one can only wonder what the apes did to deserve such a fate), "Merry Widow", "unhappy friend" - even "sick Spaniard"! 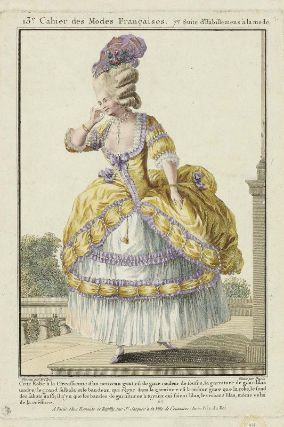 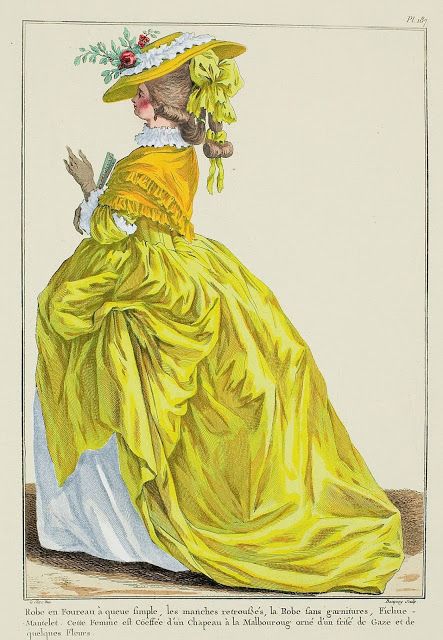 Luckily for those who delighted in the sunny shade, there were several types of gemstones that perfectly fit their yellow garb. Anne of Austria, for one, owned a necklace of pearls and yellow diamonds. Likewise, the Princesse de Lamballe received (amongst many others) a pair of bracelets adorned with yellow diamonds.

One of the more popular types of using yellow in clothing was embroidering yellow silk with colourful flowers. The Parisians appear to have been particularly creative in this regard. Elisabeth Farnese, queen of Spain, wrote to her friend, the Duchesse de Saint-Pierre in which she spoke of a beautiful silk from Paris which she had recently ordered. It was the colour of straw and had small, embroidered flowers.

When Madame de Pompadour began establishing herself at Versailles, she chose yellow as the colour of her livery, for the time being at least. Meanwhile, the House of Bourbon-Conti had long had yellow as their livery.

Towards the last years of the French royal family, yellow was not in good standing with the French people. Yellow and black happened to be the colours of the Habsburg Empire and as their (then) hated queen Marie Antoinette was Austrian, yellow became associated with the counterrevolution.

A few images of yellow in portraits:


Posted by Louise Boisen Schmidt at 22:56

Email ThisBlogThis!Share to TwitterShare to FacebookShare to Pinterest
Labels: colours